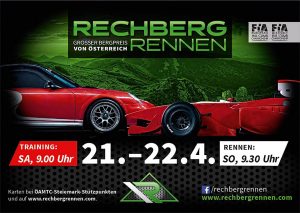 The European Hillclimb Championship moved to Austria for the Rechbergrennen. Part of the track had received a new surface. This new tarmac was more slippery than the old and made setups very difficult. It also resulted in a number of crashes. Dan Michl was the most well-known driver who got caught out on the new surface.

Christian Merli achieved one of his most impressive victories of his career. The Italian was more than 3 seconds a race quicker than everybody else. He had won the last two editions but never with a gap like this. Simone Faggioli struggled with the grip on his Norma M20 FC. Still he finished second overall and scored maximum points in the E2-SC class. Marcel Steiner drove a fast and consistent race. He completed the course in less than two minutes on both races. It was enough to secure third overall.

In fourth place we find the best Austrian driver. Christoph Lampert kept improving his times throughout the weekend. In the second race he set his personal best time of 1:59,9. This made him the fourth and last driver who went under 2 minutes. Winner of the first round Sebastien Petit finished fifth overall. He faced the same problems as Faggioli regarding the grip on his Norma M20 FC.

As expected Karl Schagerl was the fastest touringcar driver. The Austrian finished an amazing 10th overall. He also gave new meaning to the words “Flying Finish”. At the end of the second race Schagerl spun his mighty Volkswagen Golf Rallye and crashed past the finishline before exiting the track. Luckily he received a time for this race and the car suffered only cosmetic damage.

Marek Rybnicek was second fastest touringcar pilot. The Czech was 6 seconds per race slower than Schagerl but he did win the E2-SH class. Third best was his countryman Veroslav Cvrcek. The Skoda Fabia pilot also competes in the Slovak championship were he narrowly beat Igor Drotar.

The GT class was won by Pierre Courroye. He remains in the championship lead together with Group A winner Lukas Vojacek. Laszlo Hernadi remains undefeated in S2 but then again he is the only driver… Competitions is highest in Group N. Peter Jurena scored a narrow victory over Dieter Holzer. However the Austrian was not entered in the European Championship.