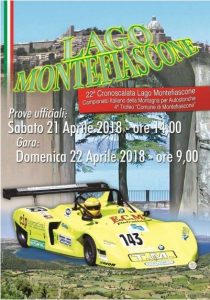 The Cronoscalata Lago Montefiascone was the second round of the Italian Historic Hillclimb Championship. Uberto Bonucci won the first round but he was in Austria. Stefano Peroni was the fastest in Saturday practise. However Sunday morning it was Walter Marelli who led the leaderboard after the first race. Peroni stepped up the pace in the second race. He improved his time by more than 6 seconds and that was enough for victory.

Peroni was also the winner of Group 5. He faced no serious opposition, especially after Alessandro Trentini crashed. Walter Marelli lost out to Peroni but at least he was the winner of Group 4. Piero Lottini in a similar but bigger-engined Osella Pa9/90 finished second. Guido Vivalda finished third in the group in just his second event with the Lucchini. In Group 3 Andrea Fiume was the quickest. The Osella Pa8/9 pilot was chased all weekend by Giuseppe Gallusi in the Porsche 911 SC. The winning drivers in Group 2 were faster than the Group 3 pilots. Giuliano Peroni completed the family succes with group victory. Giuliano Palmieri drove a fine race to finish second. Palmieri was also the unofficial touringcar winner. Finally Group 1 was won by Angelo De Angelis. Favourite Tiberio Nocentini had to retire with after a water hose broke on his Chevron B19.