The calendar for the national championship was already known for some weeks. The 2018 schedule for the regional hillclimb championship was released just recently. The regional drivers will join the nationals at all 8 events. They will also have four events of their own: Mont Saint Aubert, Sy and Vresse at the beginning of the season and Richelle near the end.
There will also be two new events. The Course de Côte de Grand Pont will return after more than 10 years. It will be competed at the end of July but will not count towards the regional championship. The Course de Côte de Trasanster is also aiming to return after many years. However at this moment no date has been set for this hillclimb near Liège. That is the reason why it does not appear on the schedule here. 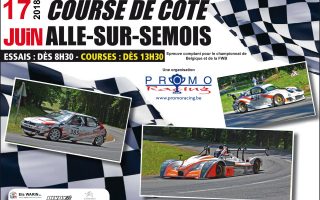