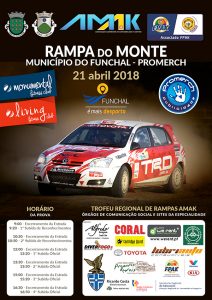 It rained very hard on Madeira this Saturday. This made the Rampa do Monte very difficult. Only at the very end of the day the sun came through. Almost every driver set their fastest time in the final race.

Ricardo Reis was the quickest in the first of four races. Conditions were most difficult here so the times did not matter much. In the second race reigning champion Dinarte Nobrega took the lead. However he was just .1 seconds ahead of Nelson Andrade. In the third race Andrade then took control. He was fastest but still slower than Nobregas earlier time. In the decisive fourth race Nobrega then set fastest time of the day to take his first victory. Nobrega and Reis made it an all Kart-Cross podium. Antonio Abel and Luis Neves were the fastest of the touringcars in fourth.