The Greek Hillclimb Championship continued with the Portaria Hillclimb. Marios Iliopoulos was already certain of the Group FS title. Still the Ford Fiesta WRC pilot contested the Portaria Hillclimb, set fastest time of the weekend and scored another great victory. Konstantinos Lazaridis and Panagiotis Parthenis had to be satisfied with second and third respectively.

For the fourth consecutive time Leonidas Kyrkos was victorious in Group A. He is now almost certain of the Group A championship. In the second race Andreas Ntofis managed to pass Michael Euthymiou for the runner-up spot. Panagiotis Lioris would have challenged the leaders but retired his Ford Escort WRC with mechanical problems. At Portaria Spyros Vorgias became certain of the Group A -2 litre championship.

Group N was dominated by Mitsubishi Lancers. Ioannis Potouridis and Konstantinos Kakos challenged for victory but it was Stamatios Katsimis who managed to take the winner’s trophy home.

Group E saw a sensational victory for Pantelis Vasileiadis. With his little Citroën AX Vasileiadis managed to beat a big field of more powerful cars. Some luck came into it too as Georgios Kechagias had a spin and lost a lot of time. 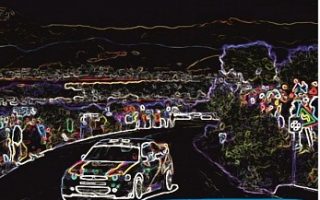