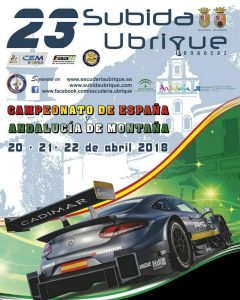 The Spanish Hillclimb Championship visited Andalucia for the Subida a Ubrique. Saturday practise started on a dry track. But because of delays, or perhaps bad luck, rain started to fall during the first race. The weather improved on Sunday which rendered the Saturday times meaningless.

Fastest driver in all races was Javier Villa. The BRC BR53 pilot took another unchallenged victory at Ubrique. Joseba Iraola and Manuel Aviles joined the reigning champion on the podium. This was also the podium of Category I.

In Category II it looked like Christian Broberg would secure victory. He was fastest in the rain and again fastest in race 2. But a great final run saw Javier Afonso steal victory. In the end just .092 seconds separated the two Silver Car S3 pilots. Winner of the first event Garikoitz Flores suffered engine problems on Sunday. This forced him to count his bad Saturday time.

José Antonio Lopez-Fombona was the fastest in practise in Category III. However the prizes are given in the races and here Humberto Janssens was the quickest. José Antonio Aznar remained ahead of Andorran Gerard De La Casa to finish third. Together they now lead the championship with 44 points. Salvador Tineo scored a remarkable result on Saturday. Thanks to the rain Tineo was fastest of the category in second overall. On Sunday he could not protect that lead but Tineo did win Group N.