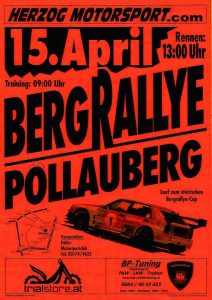 The Bergrallye Pöllauberg celebrated its 20th anniversary this year. 85 drivers were present this Sunday for the third round of the Bergrallye-Cup. Many drivers used the event to test for the Rechbergrennen next week.

Karl Schagerl barely finished his Volkswagen Golf Rallye TFSI-R in time for the event. Some mechanical problems and a small driving error seemed to push him back. However after breaking the trackrecord in the third race Schagerl was back on top. Just .07 seconds was his lead over Rupert Schwaiger but it was enough. Schwaiger had set the fastest times in race 1 and 2 but had no answer to Schagerls final supertime. Third was for a brilliant Manuel Seidl. The Porsche 997 Cup pilot scored one of his best ever results. It was exceptional considering the dept of field at Pöllauberg.

The top five was completed by two foreign guest drivers. Romeo Nüssli from Switzerland got the better of Nikolay Zlatkov from Bulgaria. Sixth place was for another guest driver. Pöllauberg is one of the few Bergrallies were singleseaters are allowed. Andreas Stollnberger came here to test his Dallara F302 and finished sixth overall.

The 4-wheel-drive class was very close this Sunday. Well at least behind Schagerl… Werner Karl, Thomas Holzmann, Andreas Gabat and Felix Pailer were separated by just .7 seconds. Gabat was competing in the ex-Franz Nowak Lancia Delta. This guest drive was arranged by Felix Pailer, the organiser of the Bergrallye Pöllauberg.