Under a beautiful blue sky the Ritsona Hillclimb kicked off the Greek Hillclimb Championship. The three fastest drivers all came from the Formula Saloon category. Konstantinos Lazaridis was fastest after the first race but Konstantinos Patsoureas set fastest time of the day in race 2. The final race results were decided on the aggregate of these two times. This meant that Patsoureas was declared the winner with a lead of just .35 seconds. Third was Marios Iliopoulos, not with the Fiesta WRC as announced earlier, but with an Audi R8 LMS.

The battle for Group A victory was equally hard fought over. Lioris Sakis was fastest in the first race but his lead was very small. Andreas Ntofis recovered some time in the second race but it was not enough to claim victory. In the end Sakis had a lead of just .22 but it was enough for victory. Michalis Euthymiou was less than 3 seconds behind the two leaders. They would also be 4-5-6 in the overall classifications.

In the three other categories the leaders managed a bigger lead. In Group E Georgios Kechagias was once again the strongest. He steered his Ford Sierra RS500 to category victory over Dionysios Trovas and Panagiotis Euthymiou. Giorgos Katsaros dominated the historics with his beautiful castrol-colored Ford Escort. Giannis Potouridis was the only 4×4 turbo in Group N. This gave him a decisive advantage to take victory in front of Giannis Foteinelis and Nikolaos Komnos. 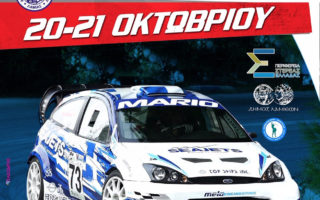