The Blagoevgrad Hillclimb was the second round of the Bulgarian Hillclimb Championship. The large crowd was treated to perfect weather and a great show by the competitors. For a long time it looked like the trackrecord would fall but eventually the drivers came a few tenths of a second short.

A great duel for victory erupted between Iliya Tsarski and Julian Teliyski. Both Mitsubishi Lancer pilots were evenly matched throughout the weekend. Teliyski was the fastest in practise but Tsarski took control on Sunday morning. The .5 seconds Tsarski took on the first race proved to be decisive for victory. Teliyski managed to set the fastest time in the second race but he was just .02 seconds quicker than Tsarski. In the all-deciding third race Tsarski then went out for the trackrecord but a small touch to the tyre barriers cost him a bit too much time. In the incident the tyres were moved a little onto the track. This might have hindered Teliyski in his final attempt. Whether this had any influence on the final results we will never know.

Winner of the opening round Hristo Manolov did not have a good weekend. His Mitsubishi Lancer dropped large amounts of oil in practise. The car could be repaired before the race and he finished third overall. Plamen Kamburov struggled with his tyres but eventually finished fourth overall. Stefan Stoev was very quick in his Silver Car EF10. However the nimble sportscar did not like the rough and bumpy road at Blagoevgrad and stopped working on Sunday. 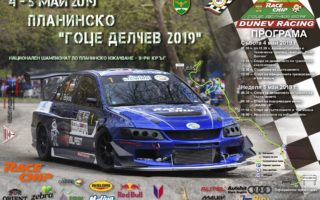