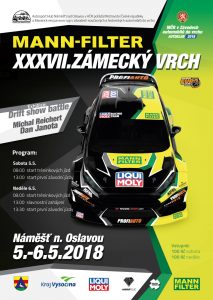 A record entry of 144 drivers was present at the Zámecký vrch. It was not the only record that was broken this weekend. In the final race on Sunday Milos Benes set a new trackrecord. It was the end of a very succesful weekend for Benes. The Osella FA30 pilot was the winner of both Saturday and Sunday and was quickest in every session.

Just one other sportscar was competing in the national championship. Jiri Spalek was runner-up on Sunday but third behind Marek Rybnicek on Saturday. There were more sportscars in Czech Trophy. Ales Mlejnek is his updated Gloria C8F Kawasaki was the trophy winner on Saturday. The day after Jaroslav Surowka was .7 seconds faster than Mlejnek. The two of them were third and fourth fastest of the weekend.

As already mentioned Marek Rybnicek was the quickest touringcar driver. Although he was fastest in every race Drahoslav Subert managed to keep pretty close to the leader. Jaromir Maly completed the touringcar podium on both days.

The Maverick Rescue Euro Cup was also competing in Námešt nad Oslavou. Austrian Alexander Frank was the fastest here. His times would have placed him 10th overall among the national drivers.