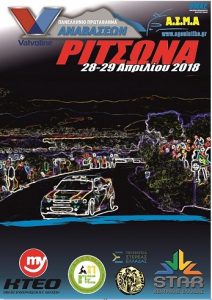 It was a perfect weekend at the Ritsona Hillclimb. The second round of the Greek Hillclimb Championship saw a massive entry, nice weather and few accidents.

As expected Marios Iliopoulos dominated the event in his Ford Fiesta WRC. Iliopoulos was 3 seconds per race quicker than anybody else. Panagiotis Iliopoulos and Konstantinos Lazaridis battled for second place in Group FS. Iliopoulos won the battle with a great time in the second race.

Leonidas Kyrkos won Group A after a hard battle with Panagiotis Lioris. Both drivers were competing in similar Ford Escort Cosworths but it was Kyrkos who was the quicker. He was also third fastest overall. Evangelos Tsiouris drove a fine race to finish third in Group A and of the 2-wheel-drive.

A huge surprise took place in Group E were the car with the smallest engine actually won the group. Eirinaiois Arvanitakis surprised everyone with his small Suzuki Swift. He finished ahead of many more powerful BMW’s en Ford Escorts. Although it has to be said reigning champion George Kechagias was not competing with his Ford Sierra RS500 this weekend.

Group N saw the battle of the Mitsubishi Lancers. Panagiotis Kyrkos was the fastest of them, although Stamatis Katsimis was very close.