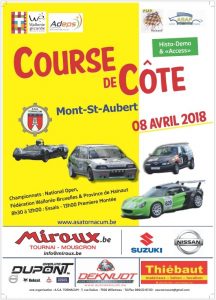 The Belgian Regional Hillclimb Championship started today with the Course de Côte de Mont Saint Aubert. It had rained during the morning which made practise quite difiicult. By the time the racing started the track was completely dry. This allowed for very fast times to be run.

Philippe Dewulf did only a single practise run but was immediately fastest. In the first race Olivier Dubois surprised with fastest time overall. Dewulf was however just .1 seconds behind. In the second race Dewulf seemed to secure victory with fastest time of the day. But in the regional hillclimbs the classifications are decided over the best two times combined. And that is how Dubois snatched victory away from the faster pilot. Dubois set consistent times that kept improving during the day. So although Dewulf was fastest over a single run, it was not enough. Behind the two leaders Christophe Le Nouvel drove to a fine third place. Fourth overall was Bruno Collard, winner of Division 4.