The Subida a La Santa near Totana is the biggest hillclimb in Murcia. The event counted towards the national Spanish Championship for a number of years. This year the hillclimb was a candidate event for the national championship. With some luck the top drivers from Spain return to Totana in 2018 after a 10 year absence.

A great number of drivers from all over Spain were entered this year already. Manuel Aviles dominated the event in his BRC B-49. The Spanish Junior Champion set fastest time in all the races and eventually won the event. Ruben Cerezo and Garikoitz Flores joined Aviles on the podium. Fourth was for best touringcar driver Gerard De La Casa. The Andorran pilot was not competing in his famous Seat Cordoba WRC. The Subida a La Santa marked the debut of his new Subaru Impreza WRC. De La Casa was not yet as quick with his new machine as with his Cordoba but is confident of improving his times in the next races. Fifth overall was Toni Ariete who was also the winner in the Levante Championship. 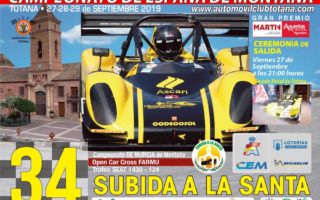