Elsewhere on the Canary Islands the Subida a Tejeda took place. Rene Santana was the winner at this hillclimb on Gran Canaria. The Silver Car S2 pilot improved himself by over 10 seconds in each succesive run to take victory. Ivan Armas had a troublesome day. In practise he was in the wrong place on the pre-grid and not allowed to start. For the first race he selected older tires but they were clearly not suited for the twisty track. To the delight of the psectators his Porsche 997 GT3 Cup pointed in every direction except straight ahead. For the second race Armas mounted new slicks and now he everything went well. He was by far the quickest driver and easily took touringcar victory. 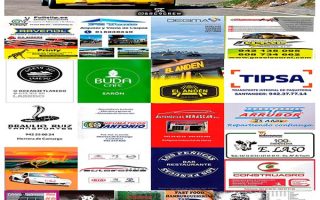