The Italian Hillclimb Championship started this weekend with the Cronoscalata del Reventino. The weather was unpredictable in the toe of Italy this weekend. On Saturday practise had to be ended early because of the poor visibility. On Sunday a rainstorm began right at the end of race 1. Almost one third of the field decided not to start in the rain or had to retire early for other reasons.

The CN pilots were the last to complete race 1 before the rain really started. That is why Achille Lombardi and Luca Ligato were 1 and 2 halfway. Trying to capatalise on his lead in the second race, Lombardi crashed and had to retire. Without his rival Ligato secured class victory and eventually finished fourth overall. Christian Merli received a 10 second time penalty in the first race for arriving late at the start. He set fastest time of the day in the second race but that only put him in third overall. Even without the penalty it would not have been enough to win though. Domenico Scola was only .3 seconds behind Merli in the second race which kept his lead over Merli more than 11 seconds. Omar Magliona split the two Osellas to finish second.

One week after his victory in Austria Lucio Peruggini scored another victory at Reventino. Peruggini not only won the GT Category, he also motivated himself to defeat all the other touringcars too. Marco Iacoangeli debuted his new BMW Z4 GT this weekend. The car was still in circuit specifications but Iacoangeli immediately secured E2-SH victory. Marco Sbrollini was the fastest touringcar driver in the second race, but his time lost in the first meant that he could not pass Peruggini or Iacoangeli in the overall classifications. Still the Lancia Delta driver won the E1 category. 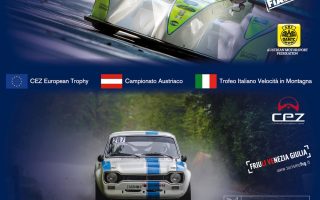