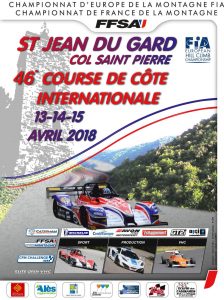 Sébastien Petit scored a sensational victory at the opening round of the European Hillclimb Championship. At the Course de Côte de Saint-Jean-du-Gard / Col Saint Pierre the Frenchman drove more consistent than his two Italian rivals Christian Merli and Simone Faggioli. Reigning champion Faggioli was the quickest driver in the first timed race but lost time in the second after clipping a haybale. Merli broke the trackrecord in his second run but had already lost too much time to Petit in the first. So with two second fastest times Petit ended up on top of the podium. Lets hope this result motivates more French drivers to develop European-ready cars!

There was also French succes in the touringcars. As expected Pierre Courroye dominated the event in his McLaren MP4.12c. He easily beat his two rivals in the GT class. Courroye was also the quickest in the French classifications. However the current champion was disqualified after the race for an underweight car. He was only disqualified in the French classifications so Courroye keeps his European points.

Due to Courroye’s disqualification, Nicolas Werver was the French Championship winner. The former champion did not compete against Courroye in the European GT class. Instead Werver opted for the E2-SH class. Here he managed to defeat Vladimir Vitver and take class victory.

The closest battle for class victory was in Group N. Tomas Vavrinec was the quickest in race one by four seconds. In race 2 the roles were completely reversed and Antonino Migliuolo was quicker by four seconds. The final classifications were based on tenths of a second, in favour of the Italian. Peter Ambruz was very close to the two leaders but had to settle for third.