Thomas Holzmann was the first to found the limits of the new track. Literally, as he had a small crash in practise. But in the race he was unstoppable with the three fastest times. Felix Pailer came very close in the third and final race but he was not consistent enough to challenge Holzmann for victory. Rupert Schwaiger suffered from electronic problems in his mighty Porsche 911 Bi-Turbo during practise. The car was repaired in time but he could not challenge for victory. Still Schwaiger finished third.

The closest battle of the day was in E1 -2000. Here Diethard Sternad was the fastest driver in both race 1 and race 3. But the final results were based on the best two out of three times. And because Christopher Neumayr was so close in every race he could actually claim victory over Sternad with a lead of just .036 seconds! 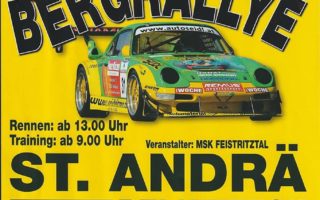